The social and cultural disparities caused by monopolies and their relationship to technological change is, as Innis noted, a central and ongoing tension of imperial history. These tensions exist in our current context in the convergence of multimedia, telecommunications, computing and entertainment industries which both undermine and align with established media monopolies. But despite the great cultural displacement and social disparity that surrounds technological change, unintended and sometimes positive consequences can emerge from the chaos.

In the formation of the virtual museum, it seems that unpredictable, socially motivated, widely accessible and diverse expression could emerge from the contest between supporters of the information highway for whom democratic potential is realized through market viability, and users of the Internet committed to extending its sociocultural accessibility. If compelling instances of culturally democratic expression are to be registered, encouraged and developed, it is crucial to foster modes of knowledge able to consider the benefits, and constraints, of emerging technologies as they supplement or displace more established configurations. In these very dynamic and uncertain times, it is impossible to predict future consequences of new technology contrary to the ongoing attempts of publicity and reportage. Nevertheless, it would be irresponsible to ignore the challenges interactive technologies present to established artistic and museological practice by applying the concepts, forms of theoretical analysis, policy and legal frameworks designed to negotiate the older forms of mediation.

In these early stages of development, the Internet’s virtual museum can be defined as a set of social and cultural relationships being reflexively transformed by the interactive capabilities of electronic and digital media, surrounded by a plethora of unresolved, unforeseen and contentious issues, that elicit curiosity, speculation, anxiety and ambivalence. The fundamental challenge that interactive media present to established artistic and museological activity is the ability to easily, rapidly and cheaply copy, alter and transmit, for example, moving and still images, sounds, spoken language and written text. These forms of simultaneous exchange defy notions of artistic value based around originality, individual authorship and integrity of the art object. At the same time, the perceptual and organizational bias of new digital and electronic media allow for emerging forms of affiliation, subjectivity and knowledge that are contingent – shifting the boundaries between the public and private, and redefining forms of property, governance and morality. 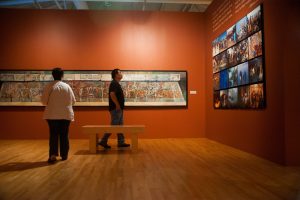