As artists have negotiated through a revisionary paradigm of cultural and personal identity, adamant, critical voicings have been raised to defend and represent socially excluded groups. The soft-spoken murmur of Lani Maestro’s art work may seem to be in opposition to this critical tone, yet it provides something equally insistent and valuable – an emancipatory space of healing. Beneath her work’s minimal simplicity unfolds a complex series of reflections on the construction of difference through poetic and experiential means.

Not that Maestro’s voicings haven’t operated under a more explicitly politicized agenda. Born and raised in the Philippines under the Marcos regime, she is no stranger to real-life confrontation between political agendas and the immediacy of survival under oppression and violence. Moving to Canada, she has maintained a symbiotic exchange between theoretical agendas and living practice. This has taken many forms including teaching, running an in-house gallery as well as a small press (the latter including the now-defunct artist journal Harbour).

In relation to this more active social engagement, Maestro’s installation work can be regarded as a more internalized interrogation of identity, one whose silence encourages a self-reflexive listening. It explores a theoretical model of differentiating self from other, one that is comprehended from the presence of immediate experience. This could be seen as an oppositional camp to that of a post-colonial interrogation of social construction. Through a non-prescriptive ambiguity Maestro’s work resonates an interplay between body and space, representation and physical presence as factors in the realm of the everyday. 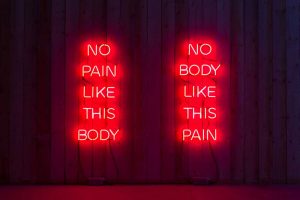 The first half of the gallery was devoted to Cradle. Ugoy. (1996), a clustering of irregular cubic volumes made of diaphanous mosquito netting, each suspended over a woven bamboo mat by guy wires. Metaphorically this tent-like architectural grouping resembled a model nomadic city, its organic growth arrived at within the confines of the gallery walls. However by their anthropomorphic scale, these gestalt cubes of white light could also serve functionally as shelter, as a resting place to kneel, sit or sleep. The use of materials indigenous to the Philippines recalls Maestro’s childhood home. Its soothing respite evoked the healing powers of Nanay, her family’s live-in nanny, to whom the show was dedicated. A personal intimacy resonated within this structuring of space, not through autobiographical means but through an intuitive abstraction of that experience, carefully reconstructed with the simple materials of netting and bamboo.

In cross-cultural terms the work reflects what theorist Kurokawa Kisho refers to as intercultural symbiosis. Seen in the light of Japan as nomadic intervener of the West, Kurokawa proposes that a cultural identity must assimilate with its “opponent” and simultaneously criticize the very construction of its binomial opposition. Maestro’s work takes on a similar appraoch through her provision of an intermediary space. This location can be traced to a Buddhist sense of consciousness that does not assimilate flesh with spirit, but instead understands its fluid and fluctuating interrelationship.

A more Eastern, and specifically Japanese, sensibility of continuous interpenetrating interior/exterior space is evoked as the corridors formed between these translucent containers provide a space between a space. This integration between inside and outside could extend itself to a similar model of differentiation and co-dependence between self and other. A dialogue between Eastern belief systems and Western conceptual art seems to reiterate the workings of the Fluxus movement, which was actively engaged in an exchange between artists from the West and East. Although there is a totalizing danger in collapsing cultural difference into a transcendental whole, these artists shared an unrooted state of mutation and flux, acknowledging a global transfer of values as affecting their respective cultures. 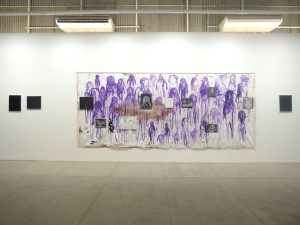 From a Western art historical perspective, Cradle. Ugoy. can be seen as post-minimal in approach. Like the work of Eva Hesse, it responds to the high formalist impersonality of minimalism with the presence of a more private, humble, self-exploratory subjectivity in pursuit of a sublime state of otherness. The heightened sense of perceptual and tactile experience of these nearly immaterial containers of their own void also recalls the spatial interventions of Robert Irwin’s scrim projects. Like that work, which takes on a phenomenological reflectivity, Maestro’s work asked the viewer to reconsider their own levels of mental construct in relation to an initial perceptual encounter. This is not to privilege a pre-language state, but instead to acknowledge the interrelation between known and unknown. Maestro’s work is a reflection of the mental processes that deduce a social and institutional organization, and in that sense it is political, proposing a radical rethinking of the construction of social meaning.

A reconsideration of the structures involved with cognitive meaning could again be found in a book thick of ocean (1994). Resting on a low-lying wooden table in the more dimly lit back of the gallery was an oversize book. Each of its some five hundred pages bore the same full-frame reproduction of an ocean surface. The turning of the book’s pages in turn reproduced the wave action caught in photographic representation. This experience of “reading” expands the field of language to the physical realm, its comprehension engaged with the body through a repetitive motion of the turning of pages, as being integral to its comprehension. The ocean, as metaphor to the abyss of the unknown, is ironically reproduced as static and contained, falling short of the infinite.

Sharing the back room was Akow Ikaw. Ang Desyerto. (I am You. The Desert.) (1994). Consisting of a coil of braided hair placed on a shallow base, it “climbed” upward like an inverted tornado, funnelling and connecting to the adjacent wall. At this juncture, a swarm of hand-written charcoal text, the Tagalog phrases of its title obsessively repeated, hovered around the linear cord of hair. By likening the text to hair, or hair to text, it suggested a physical embodiment of language, whose meaning is arrived at not merely by the comprehension of an abstract sign system. The trace of Maestro’s bodily presence activated the other works, acknowledging their seriality on more intimate, less mathematical terms.

What becomes an issue in Maestro’s work is its potential to appear culturally transcendental. The very nature of a reductive approach can pare itself down into an essentialist idealism. The iconography used in these works infer a feminine sense of place. For example the womb-like envelope of the cradles, the ocean as fluid medium, the coil of hair as female signifiers share a history as gendered metaphors of woman as nature. In a state of self-reflection it would be relevant to question the construction of this role instead of accepting it in a circular fashion as a given. What is significant in these icons is their evocation of a nonrational force that, whether gendered or not, acknowledge the presence of an unknown to consider in relation to a state of consciousness. Instead of reinstating an essentialist polemic, Maestro’s project seems to involve the simultaneous breakdown and maintenance of differential borders through a simple confrontation with the physically immediate that provides a more profound understanding of lived experience.

Cradle. Ugoy. considered immediate bodily experience and the physical presence of the unknown as neglected factors involved in the exploration of a notion of cultural and personal identity. Instead of proposing a textually privileged strategy that remains no more than a prescriptive polemic, Maestro’s work reveals a symbiotic interchange between form and content, theory and practice. Through this reflexivity it provides the means to consider a new configuration of the aesthetic in relation to cultural practice. It creates a presence of compassion, of wonder, to approach a knowledge of the world through the trusting of intuition. Unconditionally, a sense of care resonates outward to the everyday, living a sense of difference and identity through a state of reflection on the immediacy of living in the complexity of cultural diaspora.