On the Net, artistic and museological activities variously engage with the circumstances surrounding interactivity. In some cases, established configurations are strengthened and extended. For example, World Wide Web home pages offer new channels through which individual works, curated exhibitions, museum services, history and contents of collections can be promoted. Web pages can address existing and potential audiences as well as inform educators and researchers. Because it offers a more direct and efficient system of feedback, the Internet can supplement existing forms of art criticism, curatorial presentation and interpretation. Aesthetic judgment, once the purview of a few experts who advised of artistic worthiness, can be expanded to allow for new forms of response. For artists and their groups, the home page is a practical and accessible forum through which to gain recognition formerly reserved for those with the economic resources, cultural connections and publicity savvy. As an information space, home pages are infinitely revisable, and can be cheaply and extensively circulated. Hypertextual and multimedia arrangements allow for more complex and flexibly organized knowledge encouraging cross referencing to other sites, networking and collaboration.

In addition to distributing and displaying work done off-line, some artists are using home pages to address issues related to the changing perceptual and organizational biases of interactive media. Artists and organizations predisposed to exploring the relationship between culture, new media and institutional conditions have made especially innovative use of the virtual museum, and may qualify as the rare and provocative instances of social and cultural agency that Innis valued. For example, Antonio Muntadas uses the Internet’s expanded information gathering capacities in his project The File Room established in 1994 as an on-line archive for the ongoing collection and discussion of censorship cases. For Internet users and art-world participants, censorship looms as an unwelcome means through which irreverent and unpopular communication is contained and disciplined. Muntadas’ archive provides an open and expanded library devoted to examining the techniques and terms used to suppress information and censor expression throughout history and across the globe. Because World Wide Web pages allow for the flexible categorization of knowledge, the easy retrieval of information, and can accommodate the contributions of anyone willing to participate, The File Room represents censorship as a multi-dimensional instrument of moral regulation that is historically and culturally contingent.

The network and information gathering potentials of the Internet frame Vitaly Komar and Alexander Melamid’s exploration of the techniques used by pollsters to discern public taste and opinion. In America’s Most Wanted, also initiated in 1994, the artists began surveying various publics about their preferences in painting. But rather than selling their results to marketers or politicians, Komar and Melamid used survey data to paint pictures as an interpretation of majority opinion. Unlike their marketing and political counterparts who promote their results as fixed truths, the artists use their data to discuss how dominant channels of opinion gathering and taste making are adverse to more socially democratic models of public consensus building based around discussion. Extrapolating on Komar and Melamid’s project, one can speculate about how increased data gathering capacities of computerized networks will further complicate the process of taste making and opinion gathering. Because of continuous feedback and forms of information collection and storage which are so expanded that they exceed human monitoring, it will be relatively impossible to construct certain and fixed notions of public desire and behavior. These capacities also raise questions about how personal information gathered in data banks will be regulated to balance the competing interests of individuals who will want some degree of control over how information about them will be used, and the lucrative needs of governments and marketers who will pay large sums for information about the tastes and opinions of their citizens and clients.

Perhaps the most contentious configuration of the virtual museum is emerging through the collaboration between public museums and private sector information and entertainment companies. One high profile example involves the Canadian Museum of Civilization, Digital Equipment Corporation, and the Quebec and Federal governments who have established the New Media Institute to develop applications for interactive media that are both marketable and will enable the museum to make its services and collection available on the Internet. Because the Canadian Museum of Civilization is responsible for the collection, presentation and distribution of national culture whose social value is priceless, all parties supporting the New Media Institute must be careful to negotiate licensing agreements and policy arrangements that will reward and encourage creators, and maintain forms of universal accessibility compatible with interactive technology while being careful not to discourage new sources of financial support and technological experimentation. 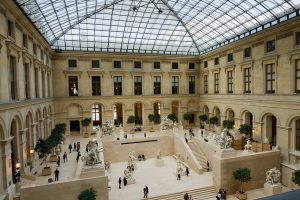 While public institutions enter into new and complex arrangements with the private sector, multinational corporations like Microsoft are planning for big business as usual acquiring the digital rights to as many well-known public and private cultural collections as possible. At present, Microsoft is modeling its virtual museum as a for-profit image distribution service along the lines of the Bettman Archive to which it recently bought the digital rights. Consisting of the United Press International’s holdings and the collections of its founder Otto Bettman, the picture service was the largest and most profitable of its time. Known for its indexing system, speedy delivery service and intensive marketing, the company was a favorite source for The Book of the Month Club, Life and Look magazines. (7) Gates hopes to extend Bettman’s empire to cater not only to the needs of mass media professionals, but to the untapped potential of home computer users. Such attempts raise many critical concerns not only about universal accessibility, but also about the ethical repercussions of allowing multinational and private sector monopolies to reap huge profits from cultures whose meanings and value have been socially produced and publicly supported.